WHICH GUITAR IS RIGHT FOR ME? 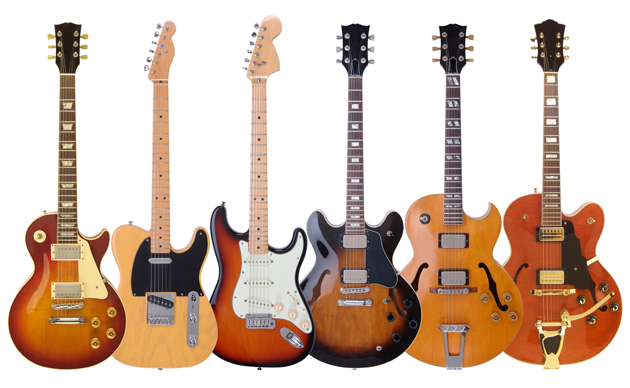 The inevitable question for any beginner guitar student: Should I buy an acoustic or electric guitar? The answer is very personal and highly individualistic but can be simplified with two approaches. First, what have you enjoyed listening to so far? Without knowing much or even anything about music, what sounds are you drawn to? Second, where would you like to go in your musical journey? Are you trying to make a career out of music or are you dabbling, maybe adding some renaissance to your skill set? Hobbyists can benefit from the right instrument, but it is not crucial to their career to avoid the frustration that comes from practicing on an instrument that does not speak to them.

Price is of course is the main concern for most people just starting out learning guitar. How is spending thousands of dollars on a professional instrument justifiable if they might not continue? It isn’t justifiable unless they can get their money back, but would they really know which instrument that would be without any prior knowledge? Most likely not. Good news, the player makes the instrument sing, not the other way around. The guitar does not make the player better, but it can motivate a beginner to keep at it, or it can frustrate a student to the point of giving up thinking it will take too long to achieve the desired results. As a result, it’s best to get the player’s hands on as many guitars as possible to see which neck and body style they vibe with the best. If the guitar cannot be held properly, the quality of the practice will suffer. The best method here is to go to a store and try as many as the store will let you try with no intention of buying one yet. Purchase some picks or a music book so they can justify letting you shop around and ask questions, just don’t be pressured into buying something you don’t know you want yet. If you do happen to find something you like, look it up online. Facebook marketplace is a great place to find used instruments locally. Craigslist less so but possibly still helpful. Acoustics can be found used for $40-$80 depending on the area. Used electrics can be found for $20-$50. Electrics however will need an amplifier or headphone interface to be played louder than an acoustic. Amps can be found for under $50 used.

Volume is maybe the easiest problem to solve for a guitarist. Acoustics can be plugged in or microphoned for more volume, but cannot be made quieter when volume isn’t wanted (without playing softly). Electrics can be played at full strength and only sound a fraction as loud as an acoustic. Both can be plugged in to headphone interfaces for nighttime/private practice. The sound achieved by acoustics is a pretty, fantasied tone when skillfully. Many songwriters will choose this method when working on lyrics and melodies. Electrics however have the advantage when it comes to diversity of sounds. Electronic effects have evolved to a point where a guitar can sound like just about any other instrument there is. They are truly the chameleon of the music world. Acoustics can benefit from some of these effects but not to the same extent. For example, an electric can be made to reasonably sound like an acoustic with a $50 effect. An acoustic cannot be made to sound like an electric in the same way. Most effects are produced with electric instruments in mind. The depth of enjoyment from exploring all the soundscapes possible with an electric guitar, a few effects, some imagination, and an amp or headphones CANNOT be understated. Luckily guitars take up much less space than drums so guitarists can have multiple guitars stored in the same space as one drum set. This allows guitarists to have a variety of guitars AND amps if they so choose.

This is a very subjective term so let’s try and decode it. Feel can refer to the way the fingers feel on the fretboard, the back of the neck, the way the guitar sits on the lap or even hangs from the strap. Acoustic guitars are usually the more frustrating version of the instrument, especially classical style nylon string “flamenco” guitars. The wider the neck, the harder to fit a small hand on the frets. That said, there are multiple sizes of these acoustics, but there are also multiple sizes of electrics. They are harder to “set up”, meaning that if they don’t feel right, adjustment won’t be a simple matter of turning a screw or knob like on an electric. Acoustics generally have thicker bodies so someone with shorter arms will have a tougher time fitting their strumming arm over the top and around to the strings, but a finger style guitarist won’t worry about that because the sound they want supersedes this (dis)comfort A contoured acoustic costs many times more than a contoured electric. Nylon string guitars have 3 nylon strings which will feel slightly softer at first than a steel string electric or acoustic. Low action, meaning how close the strings are to the fretboard, is a very important consideration when first starting out. Too low, and the strings will buzz. Too high, and the hand will tire out before getting any real practice in.

For a brand new player, gigs aren’t really a concern or priority. Eventually, it may be helpful to go try out the new skill set at an open mic night or something similar. In this scenario, any instrument should work as the venue will not have any strict rules and should be accommodating. A larger venue may have a house amp to borrow for the night, but most likely if the gig is a paying gig most players would prefer to bring their own equipment since they are used to how it works and sounds. Weight and size become an issue here. Some venues won’t want much volume on stage, meaning a big loud amp isn’t necessary and may even hurt the overall show. Other shows may not even have a PA to run guitar through so the loud amp might be helpful. Most non-professional players won’t be expected to have a full stack of speakers and powerful head. Acoustics without a built in pickup from the factory can be outfitted with one that goes right in the sound hole, or can be mic’d as a last resort. Acoustics require more careful maintenance and storage than electrics. Humidity isn’t really a concern for most electric owners, but an acoustic player may have to regulate the humidity in their home or guitar case depending on their guitar collection and area they live in. Temperature is the biggest factor in storage considerations. Glue can melt in an acoustic instrument. Bowing of the wood can happen on both electrics and acoustics but electrics are less susceptible to quick change damage, especially when kept in a hard case. Hard cases are worth the investment for any instrument that costs more than the hard case.

There are several key factors to consider when deciding whether to buy an acoustic or electric guitar. Price is similar between the two, but volume, feel and care varies widely between electrics and acoustics. A strong recommendation would be to go to a guitar shop or music store and “test drive” both options out. Which one feels better? Which one sounds closer to what you hear in your head? Each guitarist has a unique situation and style and will weigh factors differently than others. For more information, feel free to reach out to any of our guitar instructors at Music Lab – East Sacramento to see what option would be best!